Most Valuable U.S. Companies Over 100 Years

HOW MUCH DOES THE BUSINESS WORLD SHIFT IN A CENTURY?

Today’s visualization comes from HowMuch.net, and it uses Forbes data to show how the list of the top 10 companies in the U.S. has evolved over the last 100 years. 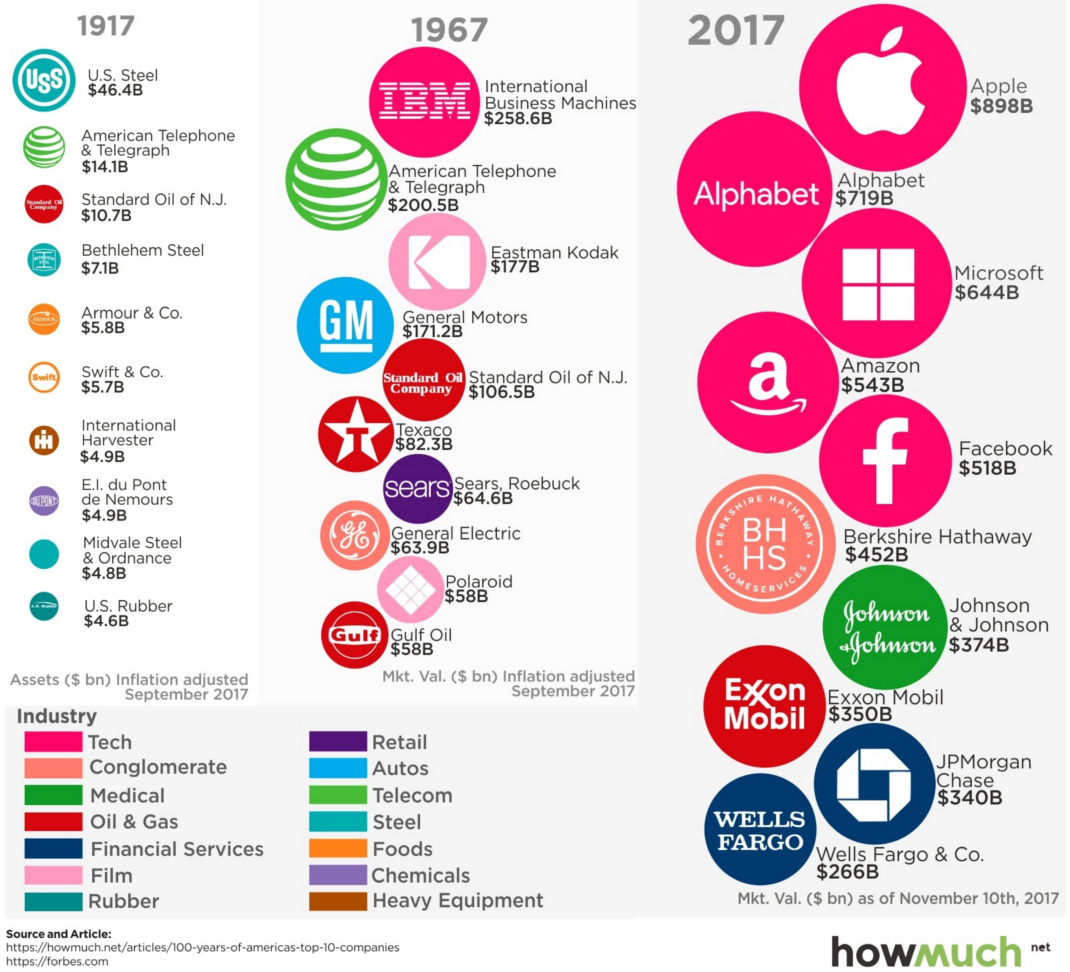 In 1911, both John D. Rockefeller’s Standard Oil and J.P. Morgan’s U.S. Steel (which was formed from Andrew Carnegie’s steel company and others) were facing antitrust action. Standard Oil, which controlled over 90% of all oil in the United States by 1900, got split up into 34 independent companies after a ruling by the Supreme Court. However, U.S. Steel, which controlled 67% of steel in the country, was able to weather the antitrust storm at the time. In the chart showing data for 1917, you can see that U.S. Steel – which was considered the world’s first “billion dollar” company – reigned supreme in the U.S. based on the value of its assets. Meanwhile, Standard Oil of N.J. (a fragment of the Standard Oil breakup) was still able to finish in the third spot on the list.

Fast forward 50 years, and oil is still big. Standard Oil of N.J. (eventually to be re-named as Exxon Corp. in 1972) is the fifth biggest company in the country. Texaco and Gulf Oil, both of which later merged into Chevron (another Standard Oil offshoot) also make the top 10 in terms of market valuation.

Aside from energy, the 1967 list seems dominated by companies that make tangible things. IBM was making some of the first and most advanced computers, GM was the largest U.S. auto manufacturer, and both Kodak and Polaroid made cameras. General Electric, a conglomerate, made everything from computers to jet engines at this time.

Fast forward to now, and platforms like Facebook, Amazon, Google, Microsoft, and Apple have taken over. We’ve shown how these five companies make their billions, and also how Facebook and Google are able to dominate global ad revenues through scale.Meanwhile, many of the stalwarts from 1967 have fallen: Polaroid and Kodak both filed for bankruptcy, and Sears Canada filed for bankruptcy months ago. And of the big names from 1917, only AT&T remains of significance.

This raises the question: what will the next 50 years hold – and how many names from the 2017 list will remain?

This article originally appeared on The Visual Capitalist. Please click here to read the original article.