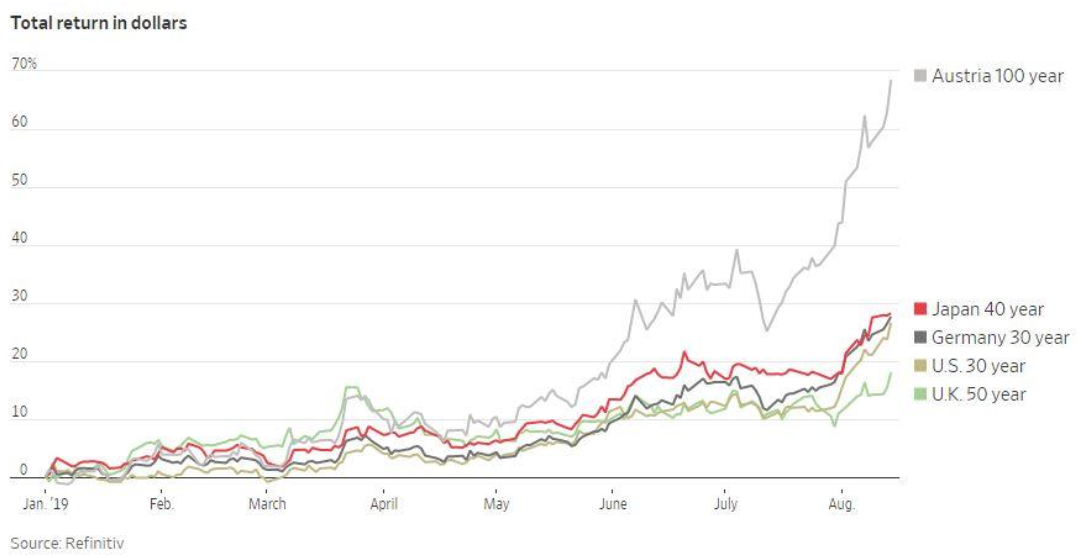 Buying bonds at such stupidly high prices isn’t a way to keep your investment safe—it is speculation.

In the old days, the government bond market was the calm, dependable one keeping a watchful eye on its excitable equity-market sibling. No longer. Bonds are now just as good a place to be if you like to bet on big price moves, and stocks—while not exactly a tranquil place to invest—haven’t moved any more than is usual.The reason: panic. Yet again there is a global rush for the longest-dated bonds, pulling down the 30-year Treasury yield Thursday to the lowest ever, below 2% for the first time. In the past three months, the soaring price of that bond has led to a return of more than 20%, something that since the 1980s had happened only in the financial collapse in late 2008 and the U.S. credit rating downgrade-plus-eurozone crisis of 2011.

Superlow yields on superlong bonds are everywhere: Germany’s 30-year is at minus 0.22%, Japan’s 40-year at 0.19%, Britain’s 50-year at 0.94% and Austria’s century bond at a mere 1.1%. All yield less than inflation. These yields can’t be justified on the basis of holding the bonds to maturity. To make sense, investors would have to think both that the world will have extremely low-interest rates and no inflation for decades and that governments won’t respond by borrowing and spending. That might be true for a while, but to believe in both lasting without a political upheaval—until 2117 in the case of Austria—is to deny history. For the moment, these bonds are huge winners—even more so overseas, where lower yields and longer maturities accentuate price moves. The price of Austria’s 100-year bond has now more than doubled since it was issued two years ago and in the past three months it has jumped 50%.

Compared with equities, long bonds have had just as many big moves since the crisis, breaking a pattern of stocks swinging further than long bonds that had held since the mid-1980s. Over both five and 10 years there have been as many days where the three-month gain or loss was more than 15% in the 30-year bond as in U.S. stocks (assuming coupons and dividends are reinvested). Part of this is because with lower yields, bond prices move more for the same change in the yield, a concept known in the industry as duration. Bonds are riskier than they used to be. However, the scale of the recent rise in long bond prices and decline in yields also smacks of panic. Bonds are being bought because people are again worried about a weakening global economy, the worsening of the trade fight between the U.S. and China, the growing belief that a new Cold War beckons and the failure of central-bank efforts to boost inflation. Political troubles in India, Hong Kong and the U.K. encourage a search for safety, too.

Moves of this scale usually only come when the imagined outcomes are terrible: a U.S. default was in prospect in 2011 and the eurozone really did look like it would blow up its own currency, while in 2008, major banks were failing. You might lose money after inflation on bonds, but equities would fall far more. Back then, the fears were eventually assuaged when central banks stepped in, and long bonds sold off horribly. This time, the imagined future mostly isn’t so bad—investors are bracing for a recession rather than a complete financial or currency collapse—but the ability of central banks to help appears to be impaired. Interest rates can’t be cut nearly as much as they usually are in a downturn, while global coordination seems unlikely given Donald Trump’s antipathy to China and objections to lower European interest rates. 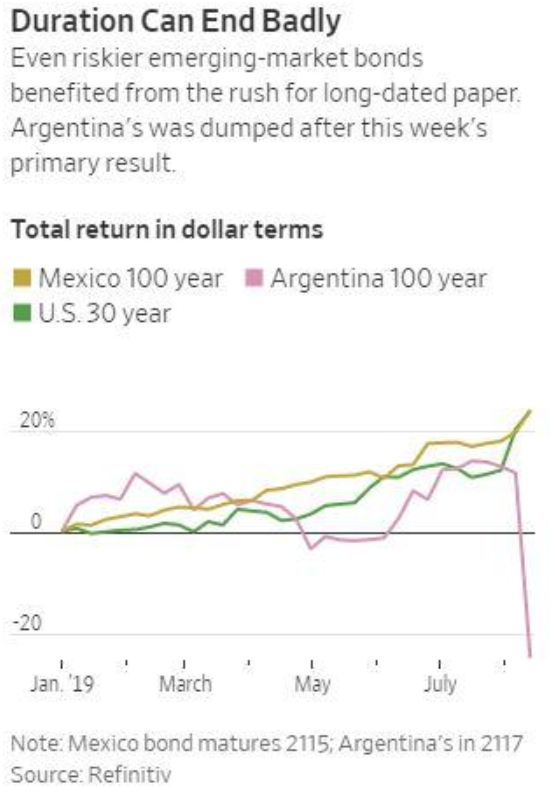 Charles Gave, founder and chairman of research house Gavekal in Hong Kong, points to another panic signal: both gold and long bonds are doing very well simultaneously, rather than moving inversely. He argues that since the 1990s, both assets only did exceptionally well during the chaos of the financial crisis, eurozone implosion and the panic over China and the oil price in early 2016. Of course, just because recent panics proved ill-founded doesn’t mean this one is necessarily mistaken, or that it won’t intensify further before calm is eventually restored. Just as in a bubble—when stock or property prices can rise far further than is rational in the expectation of others buying at a still-higher price—a panic can push up the prices (and so depress the yields) of bonds far more than seems plausible. There may be money to be made by buying long bonds if bad stuff keeps happening. But buying bonds at such stupidly high prices and low yields isn’t a way to keep your investment safe. It is speculation.