The Fed’s Balance Sheet: The Other Exponential Curve

As the threat of COVID-19 keeps millions of Americans locked down at home, businesses and financial markets are suffering.

For example, a survey of small-business owners found that 51% did not believe they could survive the pandemic for longer than three months. At the same time, the S&P 500 posted its worst first-quarter on record.

In response to this havoc, the U.S. Federal Reserve (the Fed) is taking unprecedented steps to try and stabilize the economy. This includes a return to quantitative easing (QE), a controversial policy which involves adding more money into the banking system. To help us understand the implications of these actions, today’s chart illustrates the swelling balance sheet of the Fed. 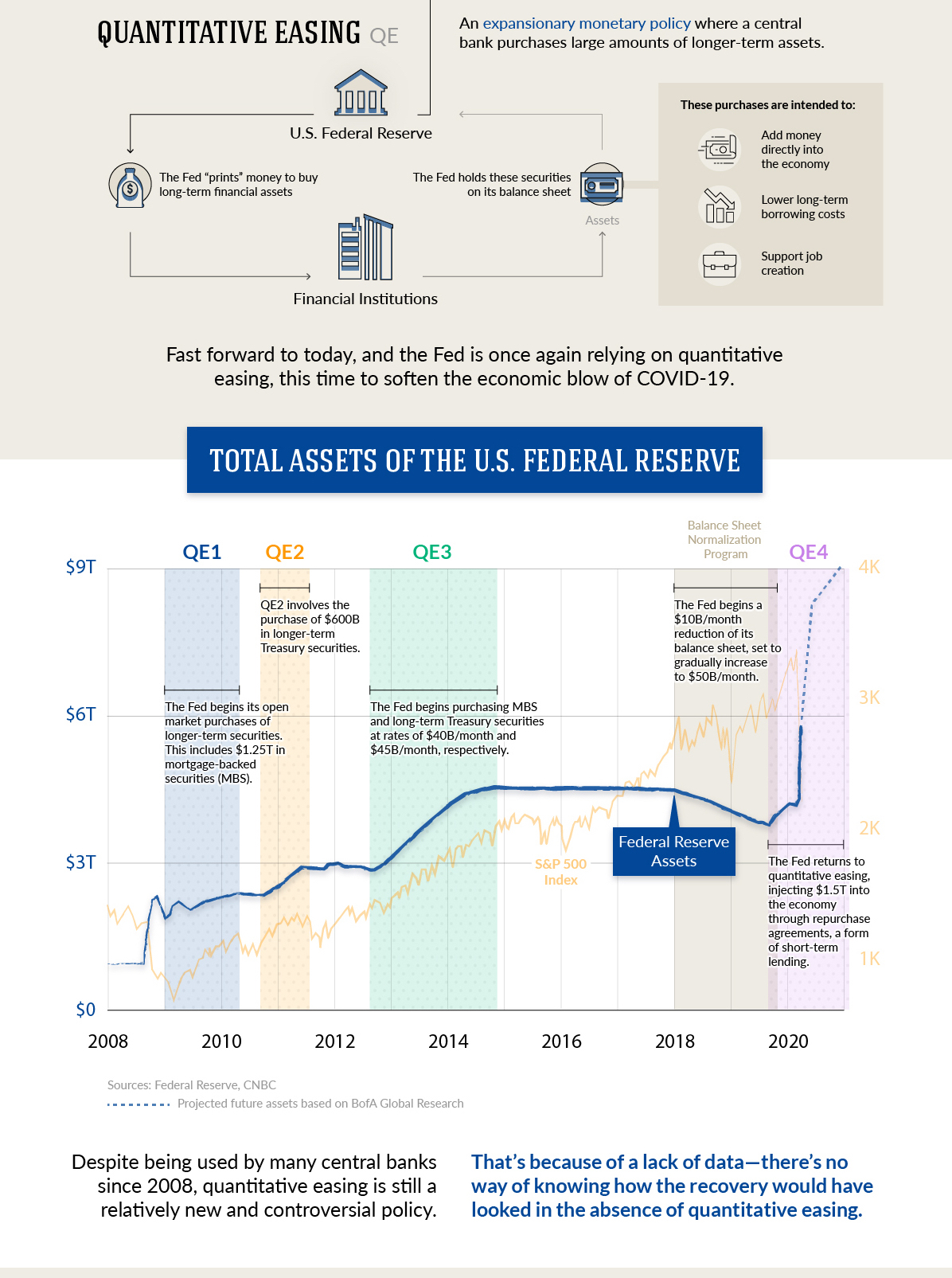 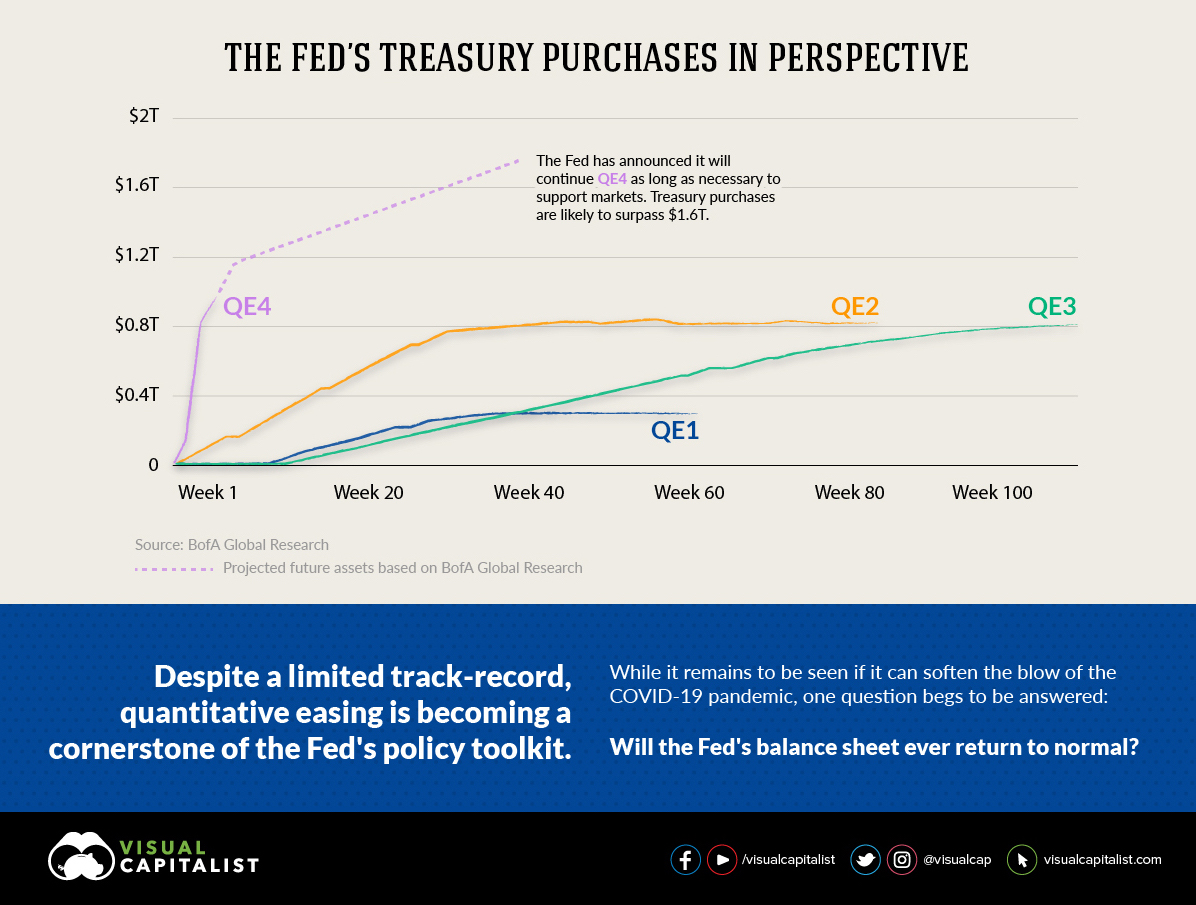 How Does Quantitative Easing Work?

Expansionary monetary policies are used by central banks to foster economic growth by increasing the money supply and lowering interest rates. These mechanisms will, in theory, stimulate business investment as well as consumer spending.

However, in the current low interest-rate environment, the effectiveness of such policies is diminished. When short-term rates are already so close to zero, reducing them further will have little impact. To overcome this dilemma in 2008, central banks began experimenting with the unconventional monetary policy of QE to inject new money into the system by purchasing massive quantities of longer-term assets such as Treasury bonds.

These purchases are intended to increase the money supply while decreasing the supply of the longer-term assets. In theory, this should put upward pressure on these assets’ prices (due to less supply) and decrease their yield (interest rates have an inverse relationship with bond prices).

QE falls under intense scrutiny due to a lack of empirical evidence so far.

Japan, known for its willingness to try unconventional monetary policies, was the first to try QE. Used to combat deflation in the early 2000s, Japan’s QE program was relatively small in scale, and saw mediocre results.

Fast forward to today, and QE is quickly becoming a cornerstone of the Fed’s policy toolkit. Over a span of just 12 years, QE programs have led to a Fed balance sheet of over$6 trillion, leaving some people with more questions than answers.

This is a big experiment. It’s something that’s never been done before.

Critics of QE cite several dangers associated with “printing” trillions of dollars. Increasing the money supply can drive high inflation (though this has yet to be seen), while exceedingly low interest rates can encourage abnormal levels of consumer and business debt.

On the other hand, proponents will maintain that QE1 was successful in mitigating the fallout of the 2008 financial crisis. Some studies have also concluded that QE programs have reduced the 10-year yield in the U.S. by roughly 1.2 percentage points, thus serving their intended purpose.

Regardless of which side one takes, it’s clear there’s much more to learn about QE, especially in times of economic stress.

The Other Exponential Curve

When conducting QE, the securities the Fed buys make their way onto its balance sheet. Below we’ll look at how the Fed’s balance sheet has grown cumulatively with each iteration of QE:

After the COVID-19 pandemic hit U.S. shores, however, the Fed pulled out all the stops. It cut its target interest rate to zero for the first time ever, injected$1.5 trillioninto the economy (with more stimulus to come), and reduced the overnight reserve requirement to zero.

Despite receiving little attention in the media, this third measure may be the most significant. For protection against bank runs, U.S. banks have historically been required to hold 10% of their liabilities in cash reserves. Under QE4, this requirement no longer stands.

No End in Sight

Now that the Fed is undertaking its most aggressive QE program yet, it’s a tough guess as to when equilibrium will return, if ever.

After nearly two years of draw-downs, Fed assets fell by just $0.7 trillion—in a matter of weeks, however, this progress was completely retraced.

QE4 is showing that what goes up, may not necessarily come down.